History of the McGrath Clan in Australia and New Zealand

This section contains information about the McGraths in Australia and New Zealand. New articles will be posted as they are researched.

The Spirit of Dan McGrath in The Australian Northern Territory

In August 2017 my interest in indigenous community history in Northern Australia led me to Darwin. The white settlement of Australia by Europeans from 1788 had a devastating impact upon indigenous society. It is only recently (2007) that an Australian Prime Minister (Kevin Rudd) made an official apology to our indigenous brothers and sisters. A decade later our nation is slowly moving towards recognition of the First Australians in our constitution and the possibility of a treaty with our first nation inhabitants. However, our indigenous citizens are still the most disadvantaged of all groups in our society.

One of the people I had hoped to meet in Darwin was Professor Anne McGrath who chaired the historical panel of The Aboriginal Deaths in Custody Royal Commission which was published in 1991. I was unsuccessful in this endeavor as she is currently Professor and Chair of The Indigenous Studies Centre at Australian National University.

However, people I met in Darwin who have worked in this field for many decades were amazed that I had no knowledge of Dan McGrath who they regard as one of the most important advocates for Indigenous Australians in The Territory. After days of discussion about community development issues in the region, I was deeply moved to be given an original painting by Joanne Nasir related to the death of Dan McGrath in Darwin in1995. 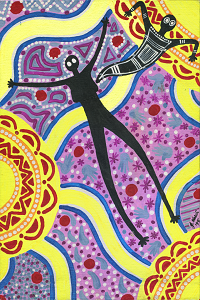 The painting depicts Dan’s spirit leaving his body and I am honoured to be the McGrath descendant in Australia who has been entrusted with this custodian role. Dan was not indigenous, he was a white Australian of Irish origin. His advocacy is a part of a much broader and, as yet, relatively unresearched aspect of Australian history. There have been many others of Irish-Australian origin who have been sensitive to oppression within Irish history and consequently highly sensitive to the disadvantage of Indigenous Australians.

I am also moved to share this painting with our international McGrath Clan. The painting is being framed and I propose to bring it with me to Eire in 2019. I have noted recently that some of the McGrath diaspora in North America are producing locally based crests of identity. As many of you know the 2020 gathering will be in Australia & New Zealand. I am therefore also planning to ask the artist to address our gathering and provide her interpretation of this iconic work. It is a contemporary example if Australian indigenous art which draws upon a number of traditional styles.