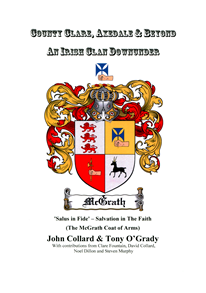 The book "County Clare, Axedale & Beyond; An Irish Clan Downunder" tells the history of members of the McGrath clan that migrated to Australia, their descendants and the societies in which they lived. The book is available for just AUD$25.00 plus postage (AUD$15.00 anywhere in Australia, please contact us for overseas postage rates). Please note that the price may be subject to change without notice.

Collard and O'Grady take us on a remarkable journey from the departures of five McGrath siblings from County Clare to Axedale at the heart of the new Colony of Victoria, in the 1850s. Their story and the equally compelling history of their descendants is from colonization to federation, a group of exceptional people who left their native place, then devastated by famine and demoralized by authoritarianism, to build a new life and to work for a prosperous future in a distant country that promised liberty and plenty.

This book traverses a varied landscape of people and places, local dramas and national traumas, heroic adventures and new inventions that shaped the futures and influenced the fortunes of the McGrath family and their many descendants. Their stories mirror the evolution of seven generations of Australian history: from colonization to federation; from limited self-government to independence; from sectarianism to today's multiculturalism and respect for the original owners of this land; through two World Wars, economic depressions, a Cold War and on to a country that now speaks with confidence and authority as a leading and respected member of the international family of nations. This impressive history will quickly become the treasured property of many and will be celebrated by ever growing numbers of admiring scholars and friends.