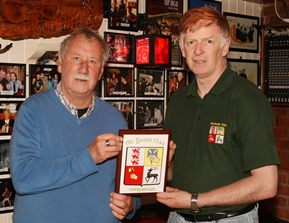 The McGrath Coat of Arms

The coat of arms of the McGrath Clan has numerous variations. The oldest and best preserved example appears on Miler McGrath's tomb at Cashel Cathedral (1622). In O'Hart's Irish Pedigrees the McGraths of Waterford who trace their heritage to Isle McGrath in Clare have the following Arms; three lions on a white background, an antelope, a hand couped at the wrist holding a cross, another holding a battle axe. The McGrath arms as depicted on Miler's tomb may be a variation on the Waterford arms and granted to him as Bishop. The three lions are linked to the heraldic crest of the O’Brien family and therefore show the close association between the two families.

There are 2 McGrath Clans in Ireland. One originates from the ancient kingdom of Thomond in the south west whilst the other hails from Ulster in the north east. There is evidence that members from both of these have intermarried. A specific example is Miler McGrath (1523-1622) from the Ulster region who eventually became the Archbishop of Cashel in Tipperary.

It is known that the various McGrath Clans of Ireland originated at Isle Mcgrath in Co Clare where they have been traced from the 11th Century. They also shared the history of the site from the late Bronze Age when settlers from Scandinavia colonized the area along the Fergus Estuary adjacent to Clare Abbey outside Ennis.

The McGrath family name is derived from the name Macraith which is borne by the descendants of four distinguished septs who had their common origin in the Kingdom of Thomond in present day County Clare. There are at least seven McGrath septs in Ireland today but only four of them originate from Clare. The McGraths of Pettigo, Co. Donegal, the McGraths of Co. Tipperary and the McCraghs of Co. Waterford are all descended from the Macraiths of Isle McGrath in Thomond (McGraw, 2005). Three of the four septs are in the south of modern Eire whereas Donegal is in the north-west but is not part of Ulster. The other three have adopted the name independently. The term clan means a traditional kinship group sharing a common surname and heritage and existing in a lineage based society prior to the 17th Century (McCraw, 2005)

See the History of Clan McGrath page for more.

The next McGrath Clan Gathering will be held from the 26th 30th of June 2019 at Dungarvan, Co. Waterford, Ireland.

The gathering will feature McGrath heritage, music, song and dance. For more information go to www.mcgrathclangathering.com